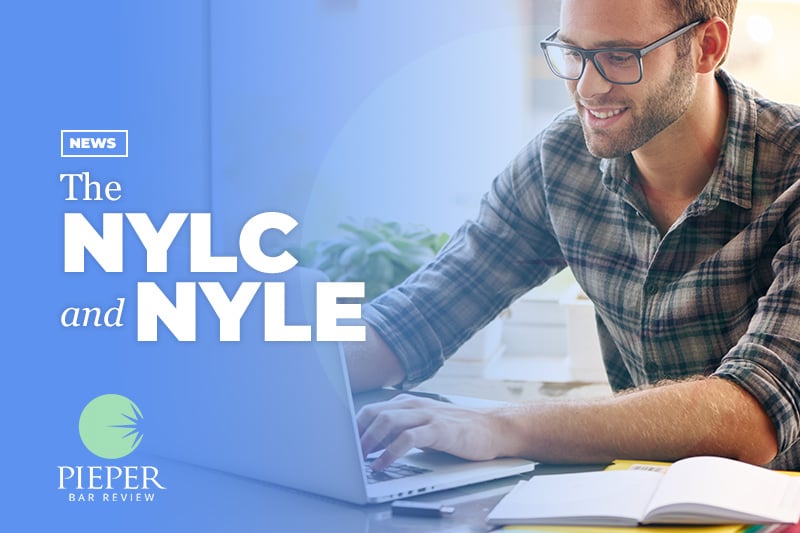 The NYLC is an online, on-demand course designed to make applicants aware of important aspects of New York law that are either different from the general principles and prevailing views of the law tested on the UBE or are unique to New York and important for the new practitioner to know. The bar examiners have released a 134-page NYLC course material packet replete with case and statute citations, which they believe will assist applicants in their preparation for practice in New York.

What is the NYLE?

Upon completion of the NYLC, applicants are then required to pass the NYLE by correctly answering at least 30 of 50 multiple choice questions on this same material during a two-hour online exam. It’s an open-book exam, so applicants can use their notes from the NYLC (and you should take notes), in addition to other course materials such as the material packet provided by the New York Board of Law Examiners.

Why you shouldn't sweat the NYLC & NYLE

Many prospective bar applicants (particularly those coming from outside New York) have expressed concern that these two requirements could prevent their admission to practice after successful completion of the UBE.

But by examining the format of the NYLC and NYLE and comparing them to similar requirements in other UBE jurisdictions, applicants should not expect either to be a serious obstacle for admission to the bar if they approach them with a modicum of academic interest (i.e. if they pay attention to the material covered in the NYLC lectures).

First, all applicants should recognize that the only thing standing between them and successful completion of the NYLC is laziness. While applicants are required to correctly answer “embedded questions” at intervals throughout the 15-hour program, applicants should expect the answers to the questions to be painfully obvious. The purpose of the embedded questions is to “assure that the viewer is attentive and engaged with the course material.”[1] If an applicant simply listens to the series of presenters, he or she will successfully complete the NYLC.

Second, all applicants should anticipate passing the NYLE if they listen to the NYLC and take a few days to study the course materials and any notes that they (or a friend) took down, and if they fail, they can take it again in three months (the rub, however, is that applicants will also have to re-take the NYLC).

Unlike the embedded questions in the NYLC, the NYLE will require an understanding of the underlying material, yet it is not supposed to be a 50-question NY Bar Exam (if it was, it would be closed book and applicants would be proctored like the UBE and the MPRE).

Instead, the NYLE is intended to serve as a carbon monoxide alarm for newly admitted attorneys, warning them of odorless distinctions in New York law before they practice (or potentially “malpractice”). It's a way for the bar examiners to help make newly admitted attorneys aware of New York Law distinctions, and its purpose is “not to erect unnecessary or unduly burdensome protectionist barriers."[2]

Other UBE states, including Missouri and Washington, have implemented similar additional local law course and exam requirements and neither has posed a barrier to admission for applicants. Echoing New York’s sentiments that local law exams should not erect barriers to admission, Missouri Supreme Court Judge Zel Fischer, explained that Missouri’s local law exam, the Missouri Educational Component Test (MCET) “was intended to prevent applicants from ‘backing into a buzz saw’ once they began practice in Missouri.”[3]

Compared to the UBE, the NYLC and NYLE will be a walk in the park. If applicants commit some time to studying what they learned in the NYLC, they should expect to pass and proceed with their admission.

[1] Ensuring Standard and Increasing Opportunities for the Next Generation of Attorneys, Final Report to Chief Jonathan Lippman and to the Court of Appeals, Advisory Committee on the Uniform Bar Examination, April 2015, p. 2. http://www.nycourts.gov/ip/bar-exam/pdf/FINAL%20REPORT_DRAFT_April_28.pdf

[3] Cindy L. Martin, Local Law Distinctions in the Era of the Uniform Bar Examination: The Missouri Experience (You Can Have Your Cake and Eat It Too), The Bar Examiner, September 2011, at 12 http://www.ncbex.org/pdfviewer/?file=%2Fdmsdocument%2F142