The Uniform Bar Exam Coming to NY: What You Need to Know 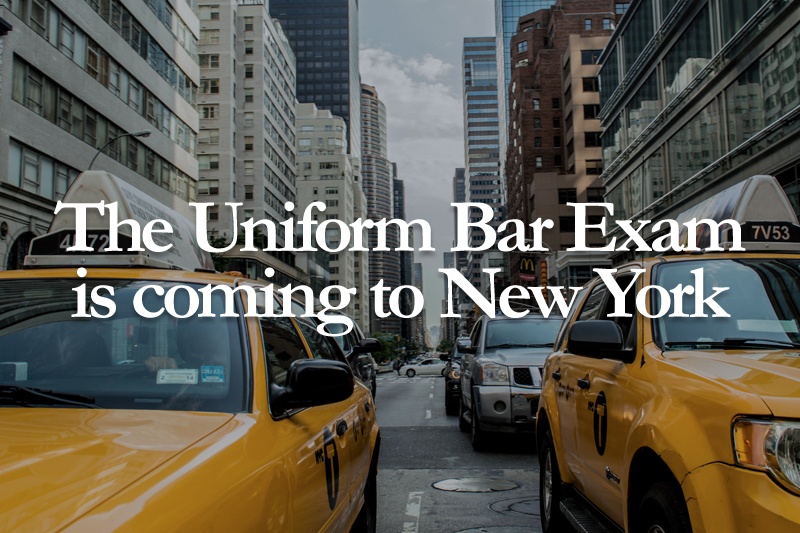 The Court of Appeals just announced that as of July 2016, New York will adopt the Uniform Bar Exam (UBE). This change has brought about confusion as to how this change in the bar exam will affect students. To help clarify some of the questions and to help ease some of the anxiety this may have caused law students, here is some pertinent information about the two exams.

First, the two exams are very similar. Seventy percent of the UBE consists of the Multistate Bar Exam (MBE) and the Multistate Performance Test (MPT), each of which have been a part of the New York bar exam for years. The only structural differences are that there will be six 30-minute essays instead of five 45-minute essays, and the elimination of 50 multiple choice questions on New York law (though there will be a separate multiple choice test on NY law that has no effect on students’ passage of the UBE, but will be required for admission to practice law in New York).

Third, the biggest difference between the two exams is that while 50 percent of the existing New York bar exam tests one’s knowledge of New York law, and the other 50% tests on one’s knowledge of generally accepted principles of law (“Multistate” Law), the UBE tests entirely on Multistate law (and no New York law). This departure from testing on New York law will actually make the bar exam significantly easier to prepare for, as many people studying for the current New York bar exam struggle to remember all of the distinctions between New York and Multistate law.

So, is this change a good thing for you? Probably. While a greater weighting of the MBE may work against someone who struggles with standardized multiple choice tests, studying for the bar exam should be easier since you won’t have to worry about New York law distinctions.

The UBE also offers score portability, which will enable students to transfer their score to another jurisdiction for several years after they take the UBE. This is not much of a benefit if you plan to live and practice law in New York, unless you have a job that allows you to be admitted in any jurisdiction (e.g. many legal positions in the federal government). In that case, even if you do not achieve a passing score in New York, you might be able to transfer you score to another UBE state with a lower passing score and become admitted there.

Drawbacks:
There will now be more competition from job-hungry graduates from other states who are no longer scared off by the prospect of having to study for what has been considered one of the most difficult bar exams in the country (because of its emphasis on New York law). If those graduates take the UBE in another jurisdiction, they can transfer their score to New York and only have to complete the short, New York-specific multiple choice test to gain admission to practice in New York.

But don’t stress over that. You didn’t decide to become a New York lawyer thinking there would be no competition.

You decided to take the New York bar exam because New York is in many ways the capital of the world, you want to be in the center of the action, and you’ve always known that you’ll be ready for anything that is thrown at you.

A little more competition isn’t going to hold you back.

You may see some changes to your law school curriculum next year (perhaps in the form of decreased emphasis on courses teaching New York law in favor of a more nationalized curriculum) but it shouldn’t be anything earth shattering. You will still be exposed to the essentials of New York law so that you’re prepared to practice when you graduate.

Here at Pieper Bar Review, we’ve been re-organizing our materials for next summer’s class, trimming the coverage of New York law and replacing the essays to fit the format of the UBE. Between your law school and Pieper Bar Review, you will be fed a steady diet of the UBE next year. You’ll be ready.

The UBE (and more precisely, each of its components) have been around for a long time, so while this will be a new exam for New York, it’s less of an adjustment than, for example, the introduction of Federal Civil Procedure which hit the MBE for the first time this February.

Bottom line: You’ve got this. And we’ve got your back.

If you have any further questions, don’t hesitate to contact us.