Get MBE Practice Questions Delivered to Your Inbox Daily 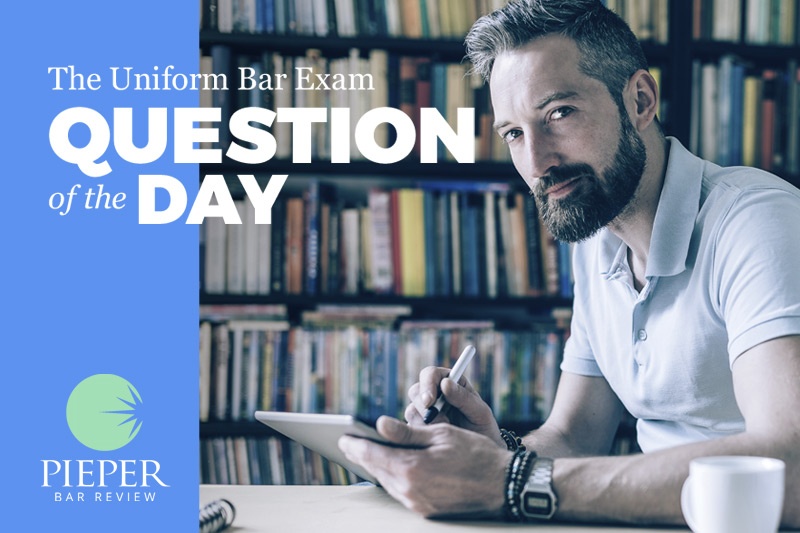 The Multistate Bar Exam (MBE) is the multiple-choice section of the Uniform Bar Exam (UBE). It's a six-hour examination featuring 200 multiple-choice questions, testing examinees' abilities to apply fundamental legal principles and reasoning to given fact patterns.

Such a comprehensive exam demands an equally rigorous preparation regimen. Besides enrolling in a bar review course, the most effective study method for the Multistate Bar Exam is to answer practice questions.

Yeah, we know: easier said than done. Fitting this into an already packed schedule of intensive studies and related assignments, the responsibilities accompanying a job, and all the countless duties and unpredictable situations of personal and home life—whether that's caring for an elderly family member, children, or just the daily rigmaroles—can sound overwhelming.

With Pieper Bar Review, however, it doesn't have to be.

Pieper's Question of the Day is convenient, and most importantly, effective. By signing up, you'll receive one free sample MBE question delivered to your email inbox, daily. You can either answer the question first thing in the morning, save it till you get a free moment during the day, or take this helpful quiz right before you go to bed at night. It's all up to you.

Answering these useful practice questions provides a constant, daily refresher on essential factoids you'll be tested on when it counts most. Their accessibility and portability means you can get crucial study time in wherever, and whenever, is best for you.

Pieper Bar Review's Question of the Day enables you to:

With Pieper Bar Review's Question of the Day, preparing for MBE has never been more convenient! Register below for free, and have helpful MBE practice questions delivered to your inbox, daily!

In which case is the defendant not guilty of the murder of the victim?

The Answer is A.

The correct answer is choice (A). This question deals with the legal implications of intoxication in various homicide situations. Choice (A) is the only situation in which, because of drunkenness, the defendant lacked the intent to kill. This could be a case of unintentional, “depraved heart” murder, but the facts do not explicitly show extreme recklessness for a purpose of low social utility - it is not stated why the defendant was firing his gun - and, if anything, his intoxication may have prevented him from being aware of the risk he was creating.

Choice (B) is incorrect because, despite the defendant’s drunkenness, he intended to kill another man. In making the attempt he instead killed the victim, but, under the doctrine of transferred intent, he is guilty of the murder of the victim.

Choice (C) is incorrect because the killing was intentional and without justification, excuse, or mitigation – the definition of malice. The victim’s insulting words, standing alone, are inadequate provocation as a matter of law; thus, the crime cannot be voluntary manslaughter. The majority rule is that diminished capacity due to voluntary intoxication does not reduce murder to manslaughter.

Choice (D) is incorrect because the defendant formed the intent to kill before becoming drunk and evidently maintained it until he did kill. His consumption of “liquid courage” did not negate his intent to kill, which is the majority view, and is irrelevant to the grading of the homicide. The only alternative to murder - voluntary manslaughter - must be ruled out because of the three-hour cooling-off period between provocation and killing.